When the author Anna Porter got an invitation to appear at the 92nd Street Y in New York City, she had no idea she was following in the footsteps of Martha Graham, Isabel Allende and Jimmy Carter. Not to mention a certain hero of the Holocaust…

An invitation to the 92nd Street Y is better than a tap on the shoulder from the Queen at Buckingham,” according to the late Frank McCourt. It is the Carnegie Hall for authors, especially those whose idea of an audience for a reading tends to be a small group of literary citizens assembled in a church or synagogue basement, or a table at a festival shared with a couple of fellow travelling authors.

I have attended such events in, among other places, Santa Fe, Los Angeles, Moose Jaw, Vancouver, Toronto and Calgary. But this year I had an invitation to New York City’s famed 92nd Street Young Men’s and Young Women’s Hebrew Association, best known simply as the 92nd Street Y.

I had read at Ys before, and my modest expectations were reinforced when Jack Rabinovitch, the legendary founder of the Scotiabank-Giller Prize, mentioned that he used to play basketball at this particular one. Jack was in New York at the time my invitation stated and decided to come along for old times’ sake. The 92nd Street Y had been a favourite spot for him when he lived in New York during the 1970s. What he failed to mention until we were well on our way was that this Y had also welcomed Paul Robeson, I.M. Pei, Yo-Yo Ma and Martha Graham; that the Dave Brubeck Quartet had played there in the spring, that Isabel Allende, Malcolm Gladwell, Barry Unsworth and Jamaica Kincaid had recently appeared in its speaker series. By then, despite my anxiety attack, it was too late to graciously decline.

Undeterred by the strenuous security checks, Jack gazed at the grand old place with cheerful nostalgia. The massive red-brick building at the corner of Lexington and 92nd is a proudly Jewish institution (hence the security checks) that has welcomed people of all ages, ethnicity, social classes and religions for the past 134 years. The tour by one of the organizers, a man who spends half his time in Israel, took us past the gym, the pool, the children’s and adults’ art centres, the dance studios (where Alvin Ailey premiered one of his works), the theatre (Pinchas Zukerman and the Tokyo String Quartet have both played here), and the various halls where writers, teachers, fitness gurus, politicians (Mikhail Gorbachev, Jimmy Carter, Kofi Annan), business leaders (Bill Gates) and comics perform.

There is a 25-yard pool, and two gyms. There are programs for seniors, dance instruction and mental health programs.

I was listed under “Adult Lectures and Workshops.”

Jack chatted amiably about the wonderful times he had playing basketball here and handball in Montreal. I think I blacked out for part of the tour and came to with a jolt when we were shown into the room where I was to present Kasztner’s Train. I was still looking for a way of escape. Jack helpfully suggested that I should not be an idiot.

There were about 200 people in the audience and most of them knew a great deal about the Holocaust – the setting of Kasztner’s Train. In the end, I read little and we talked more. It was one of the most interesting evenings I have had since the book was published.

Most significantly, for me, an elderly woman, herself a survivor from Hungary, offered to introduce me to Elie Wiesel, a man I have wanted to meet ever since I read Night some time in the late 1960s.

As it turns out, this is not only Jack’s Y, it is also Wiesel’s. 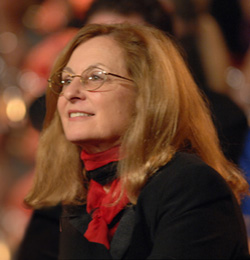 Anna Porter’s most recent book is Deceptions, a savvy art world thriller with a strong, independent heroine. She is the author of four other novels and five non-fiction books, including Buying a Better World: George Soros and Billionaire Philanthropy, The Ghosts of Europe, Kasztner’s Train: The True Story of Rezso Kasztner, Unknown Hero of the Holocaust, and a memoir, The Storyteller: A Memoir of Secrets, Magic and Lies…. [more]

The Agenda on TVO 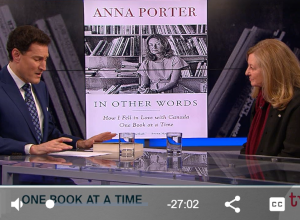 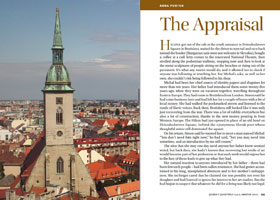 Read an excerpt from The Appraisal, as published in Queen's Quarterly (2017)

Can Billionaires Buy Us a Better World? Walrus Talks, November 24, 2015